This post is a follow-up to the intro post about The Stable Marriage Problem. Check out the previous post to understand the problem/solution because this post examines its implications, particularly in the modern dating world.

A fascinating consequence of the internet is how much closer it has brought the problem of finding your soulmate, as well as how much closer the assumptions in the original Stable Marriage Problem (SMP) are true in reality. The original paper from 1962 has assumptions that neither worked then nor now, but it started the discussion on how to best pair people for marriage and any entities for any purpose in general.

The original SMP assumes that everybody knows everybody so that each person can rank everyone in the opposite gender. This was a clearly unrealistic assumption back in 1962, however, nothing has been a more unifying resource in the history of humanity than the internet.

While the SMP may have been an interesting experiment to replicate in a small closed off town 25 years ago, people are finding other people at a much greater rate and from a larger and more diverse group, allowing the SMP to simulate real life more accurately.

The table below shows the top three ways people have met their partner by decade in the past 50 years:

The 2010’s showed a monumental rise in online dating, and the number of people who have met their significant other online is only going to continue to grow. Online dating is interesting in particular because it provides us with a breadth of information on dating patterns in the modern age.

I wanted to see how the SMP actually worked when run through some simulations, and how well it actually models real life.

In order to benchmark some variants of the SMP that model real life more accurately, let's start off by simulating the classic problem scenario proposed over 50 years ago.

I created a Python implementation of the classic SMP solution in order to calculate some initial results on what a 'perfect' world would be like.

The standard algorithm was run with different population levels - the number of iterations to find a stable matching as well as the average preference rank each person matched with was recorded. 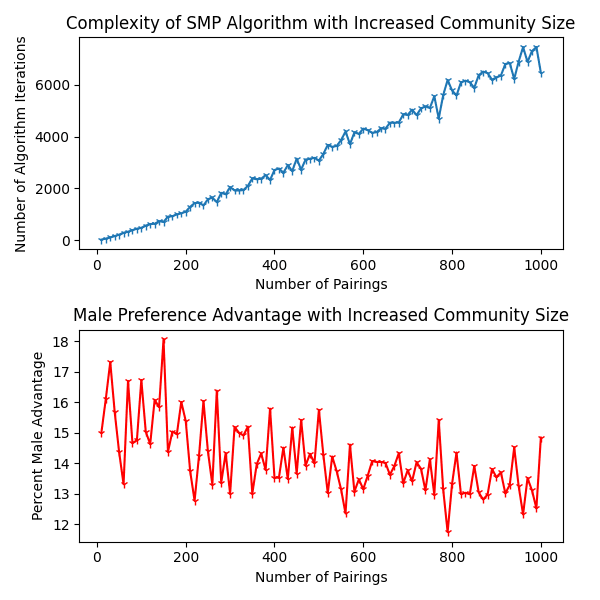 From the simulations we can observe two things:

There are some pretty large assumptions being thrown around in the classic SMP scenario.

In my opinion, the biggest assumption made is that preference sets are randomly assigned and uniformly distributed. This means that everyone's preference is not correlated with one another's, and that for large enough populations everyone's attractivness is roughly the same (based on how the opposite gender ranks).

I don't know about you, but I certainly don't have an online following of girls gushing over me like Timothée Chalamet does.

As mentioned before, one of the interesting ramifications of the rise in online dating is the amount of data we can aggregate from it.

OkCupid periodically releases dating information in their blog, and some time ago they released some interesting numbers in how men perceive attractiveness of the opposite sex versus women. The following charts outline the discrepancy:

From the data (specifically the dotted lines) we can see two things:

So how do we change our problem?

We can tweak our original code so that each gender's preference rankings are more aligned with their respective distribution of opposite sex attractiveness.

I ran the same simulations again with the updated code and it produced the following results: 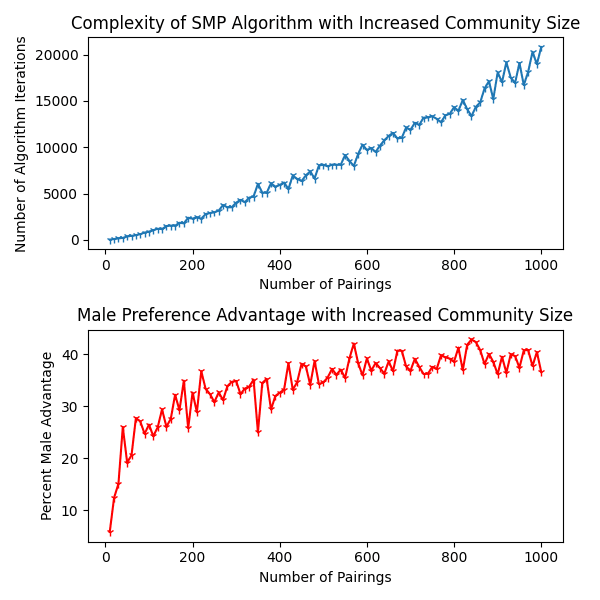 This is the same type of data analyzed from the previous simulation, but with much different results:

What Did We Learn From This?

There's obviously many gross inaccuaries when trying to reasonably model the dating world, but the SMP offers an initial glimpse as to why dating is so difficult and why certain tropes exist.

Why it's always better to be the initiator

A clear callout from the analysis is that men end up having the advantage when everyone is paired. There's two main reason for this:

Men are traditionally assumed to be the first group to make a move and it is why the men in the code simulations make the first move. Because men make the first move, the algorithm benefits men as it works in a greedy behavior to get them the best possible partner.

With respect to the problem, any gender can theoretically be the one to make the first move and reap the benefits demonstrated by the SMP simulations. 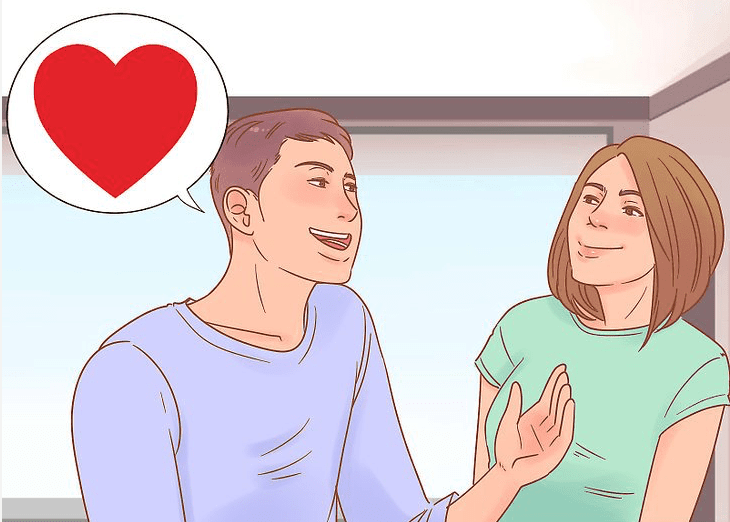 ⠀From WikiHow, I can't really draw this well

2) Preferences of Men vs Women:

The discrepancy in preferences for the opposite sex between men and women is what caused the stable pairing advantage for men to jump from 13% to 39%. While all other things are held constant, it was the preferences that caused this jump because it all ends up relating to how people perceive attractiveness.

The OkCupid data shows that women have higher standards for men than men have for women, and this is the main driver for why there is a larger male advantage when the SMP algorithm incorporated the gender attractiveness distributions.

I am in no way concluding that women are unhappier with men in their relationships - there are a million other factors including personality, status and chemistry that affect how each person in the relationship views each other.

However, it does lead us to how the outside world perceives the relationships...

The show How I Met Your Mother was a staple TV show during my coming of age years, and it surprisingly had many apt theories surrounding modern dating.

One of the most notable ones was the concept of Settlers and Reachers - as said in the show:

Every good relationship has a reacher and a settler. One person reaches for someone out of their league, while the other one settles for someone below theirs.

Based on everything we've learned thus far, we have seen that for the most part the men are the reachers and the women are the settlers.

Once again, this is just a generalization that only looks at pairings of men and women as a whole, and there are always examples that prove the opposite. But in my opinion, it does explain why in so many relationships that I see, my initial appearance based reaction is that the guy is punching above his weight class.

And there's plenty of media examples to back this up. 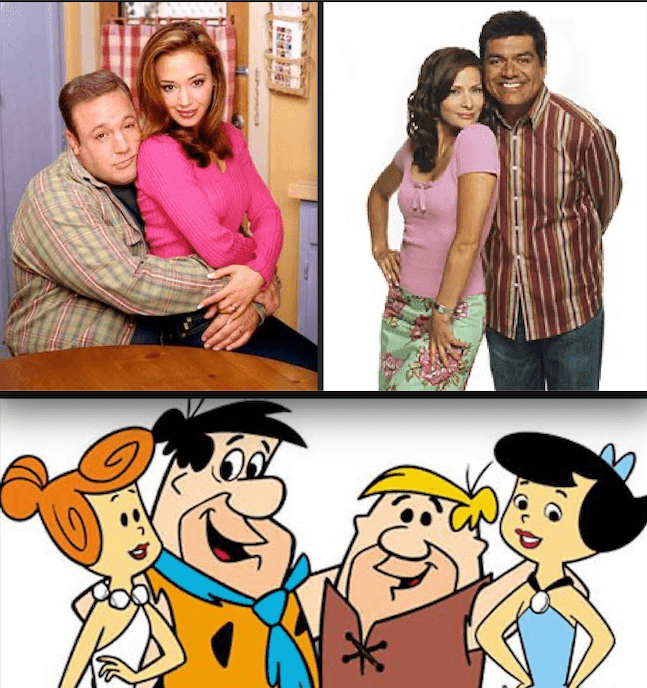 ⠀⠀The guys really do be having a good personality though

The observation is also noted by critics as the Movie and Television's attractiveness gap. And there's even a TV tropes article for it!

Modern Dating is harder than ever

Lastly, this point is about the complexity of the SMP algorithm and why it matters.

You can throw a rock towards any college and it would probably hit a student in an overcrowded Computer Science class who would be ecstatic to tell you all about why an O(n²) algorithm is the worst thing since jorts. 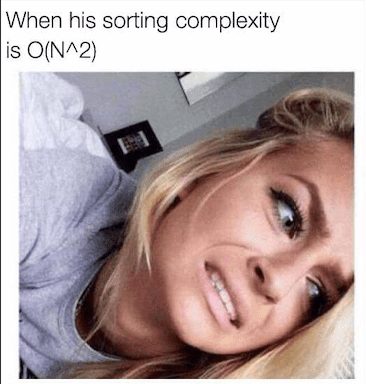 The exponential nature of this algorithm shows that as a given community grows, it becomes exponentially harder to match people in a stable manner.

If you grew up in Tolono, Illinois, and all you've ever known were the proud people of Tolono, you'll probably find an easier time finding a partner than if you packed your bags and ran off to the Big Apple.

It is why it was much easier (in my opinion) to find a partner 30 years ago than it is today. Our commmunity has become increasingly global, and we're meeting people from all walks of life through all of our technological achievements.

Of course, this is all undeniably better for the advancement of the human race, however, it does make dating now just a little bit harder.

Did I write all of this to justify why I'm single?